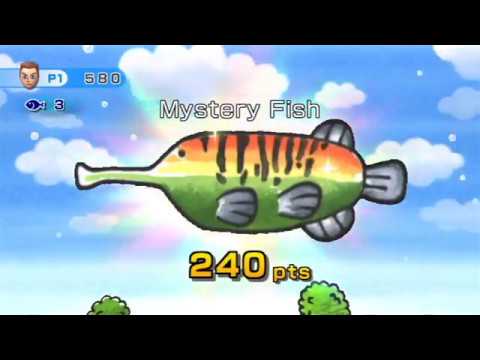 This is a capture of me earning a platinum medal in the Fishing mode of Wii Play for the Wii. This was recorded directly from my Wii (not the Wii U).

I had actually been interested in getting Wii Play since shortly after I got my Wii in early December 2006 because it looked like more of Wii Sports. However, I never got around to buying it until 2011, mostly because I made the mistake of listening reviewers who bashed the game. It’s a shame I waited so long because the game is actually quite fun. It reminds me of a lot of the simple black box NES games I played as a kid.

Fishing is one of the weaker games in this title. Although it makes good use of the Wii Remote’s three-dimensional tracking, the gameplay falls a bit flat (pun intended). Nintendo should have made this more like the fishing in Ocarina of Time or Twilight Princess instead of using cardboard-looking fish in some tiny pond.

To earn a platinum medal in this mode, you have to obtain at least 2600 points. To do this you’ll want to avoid the small fries at all costs and try to catch one or two of the special fish.

Recorded with the Hauppauge HD PVR and the Wii’s component cables at 60 frames per second.