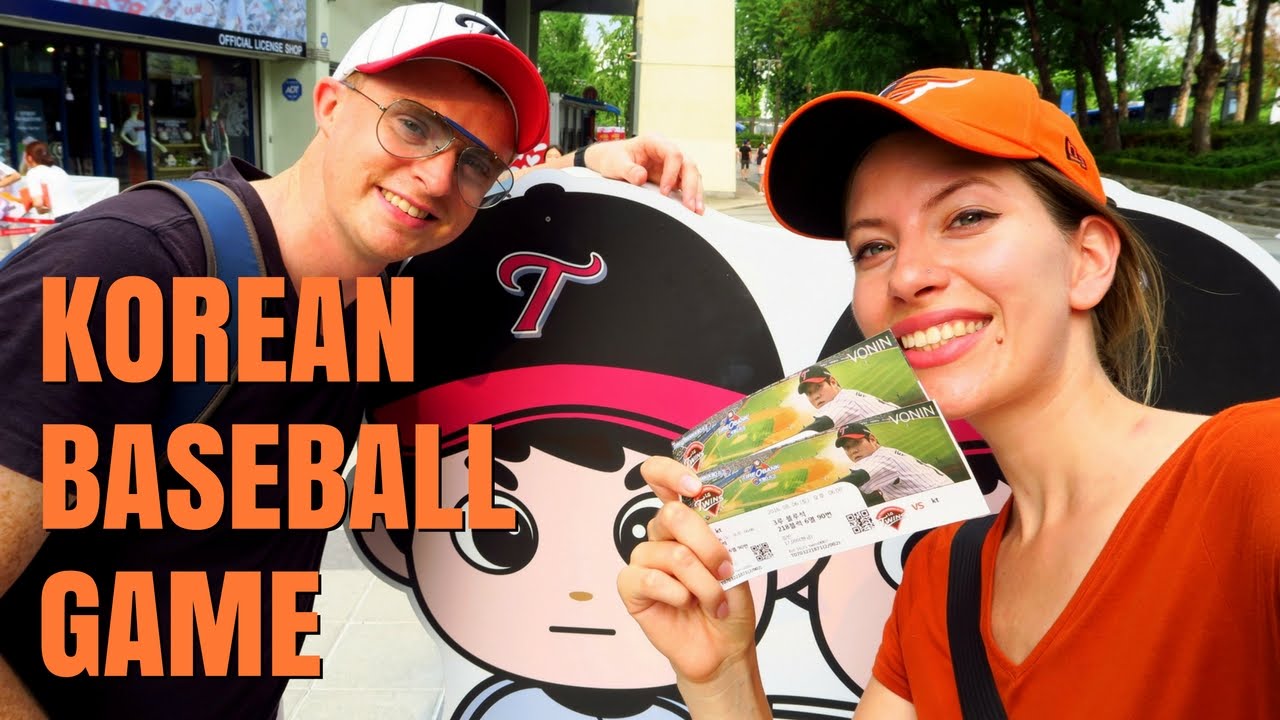 If you’re a sports fans one of the coolest things to do in Seoul is watch a Korean baseball game (Yagu: 야구) at Jamsil Baseball Stadium (잠실 야구장). On maybe one of the hottest days of the summer we watched the LG Twins (LG 트윈스) versus the kt wiz (케이티 위즈). Before the game even started we were trying to cool down with huge beers and Korean snacks including squid and tteokbokki. The game itself was fantastic but it was the passion of the Korean fans cheering and chanting along with the cheerleeders that really stole the show. Every player had his very own chant. We highly recommend coming to a game!

Okay so Sam is pretty pumped about today’s outing. Tell us what are we doing? This is the one thing I’ve been looking forward to doing in Seoul more than just about anything else. We are going to a baseball game here in Samuel. A Yagu (야구) game. Yaku (야구) means baseball in Korean. We are watching the LG Twins (LG 트윈스) play today.

Alright are they any good? Actually I don’t think they’re having a very good season. The other team that plays here, the Doosan Bears (두산 베어스), I think are in first place. So this is kind of the lesser of the two teams that play at this stadium.

So Sam needs a baseball hat for the game.

Alright new hat to show off. Yes, I just got my LG Twins hat, another one to add to the collection. And this old one I have here is actually of the Hanwha Eagles (한화 이글스). They’re a team that plays out of Daejeon (대전). And I used to teach English in Daejeon back in 2009 so way back when like seven years ago I bought this hat.

So baseball in Korea is about much more than just the sport. You come here with friends to eat chicken, drink beer, chew on some squid. You can even get dried squid. ojing-eo (오징어). So we are going to load up. We’re basically going to have our dinner here before the game starts. Let’s go find food.

I just ordered myself some ojingo – the squid.

Let’s take a bite. Oh my gosh. That looks chewy. That is really good. I think you’re supposed to eat one tentacle at a time. Probably. And then over here you can see they have even more different types of seafood products. More dried seafood. This is what you eat when you go to a Korean baseball game.

I think it is like over thirty five degrees today guys so before we even go to watch the game we’re cooling off. If you look over here you can see there is a whole bunch of other people. Everyone else had the same idea. We’ve all got the same idea. We’ve got a liter of beer in hand. We’ve got our snacks so what we’re going to do is just cool off a bit before the game starts.

And this beer was really cheap. It was three thousand five hundred Won. So ₩3500 which is roughly I would say about three US dollars. For a litre. Really good value.

For a liter of beer. Nice! Let’s try this. So we’ve got OB Premier Pilsner. Maekju (맥주). Cheers. Cheers.

So the feast continues. Yes, our pre-game feast continues. We have got Tteokbokki (떡볶이) the Korean spicy rice cakes. Basically one of the most classic Korean street food snacks you can get. Alright, it has got basically these rice cakes, called deok (떡) which are covered in Gochujang (고추장) sauce which is the red pepper paste.

So the cool thing about the Korea Baseball Organization is that it is a fairly small league. There are only ten teams. And what is really unique about this league is that they are not named after the cities. They’re named after the companies. So for example, we’re watching LG Twins. LG is the company. And there is three teams based out of Seoul and the other seven teams are throughout the rest of Korea. So you have teams for example like Gwangju and Daejeon. Busan and Incheon and other places like that.

So Sam may have come for the game but I’m here for the cheerleading and the dancing. That is the only thing I’m looking forward to. Seriously impressive. Over there!

So that was hands down one of the coolest baseball games I’ve ever been to. It was all about the cheering and the chanting. And each player had their own song.

Music in this video courtesy of Audio Network