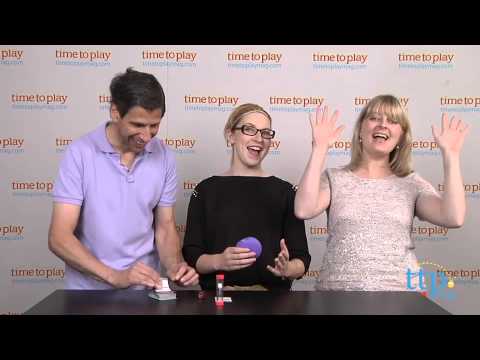 For the full review, where it’s in stock, and how much it costs, visit

There’s a new version of the popular game Taboo, and it’s got some new rules and game pieces. As in the original version, one player tries to get his teammates to guess the word at the top of a card. The player must give clues, but he can’t use any of the Taboo words in his description. You score points for each word successfully guessed, and the team with the most points wins.

In this new version, there are 162 double-sided cards with two words on each side of the card. This offers a lot more words to play with.

Another new feature is the squeaker. Instead of a battery-operated buzzer to buzz whenever the card reader says a Taboo word, now someone simply squeezes the squeaker. The non-guessing team gets one point for each card that is skipped or squeaked.

And when you’ve mastered the classic game, mix it up by rolling the game-changer die before the timer starts. There are several things the die could land on. You might only get one teammate to guess. You could get double the time for your team to guess. You might have to stand perfectly still while giving clues. Or both teams could get to guess the word being described.

Taboo comes with 162 cards, a squeaker, a sand timer, a score pad, and a die. The game is for four or more players broken up into teams.